Halogen source gases that contribute to ozone depletion are mostly chlorine- and bromine-containing chemicals that have very long lifetimes in the atmosphere. Equivalent effective stratospheric chlorine (EESC) is a convenient parameter we use to estimate the amount of stratospheric ozone depletion due to these compounds. The higher the values of EESC the more chlorine is available for the destruction of ozone. The units of EESC are in parts per billion by volume (ppbv, volume of equivalent chlorine to the the volume of air). 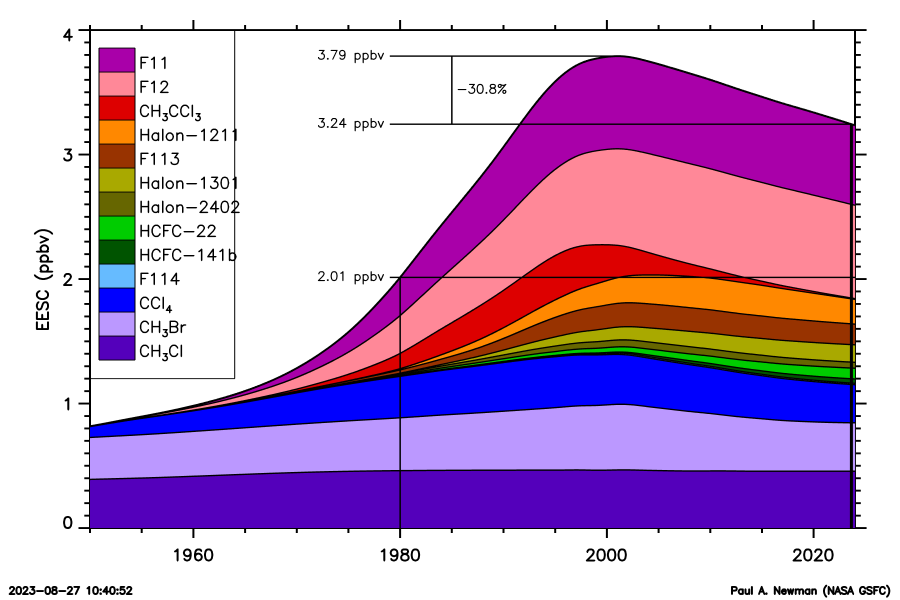 The contributions of various halogen source gases to the total EESC.

The figure shows the contributions of various halogen sources to the levels of chlorine and bromine in the stratosphere. The contribution of each compound to the total inorganic chlorine and bromine is color coded. The dominant natural compounds are methyl chloride (CH3Cl) and methyl bromide (CH3Br) The dominant anthropogenic compounds are the chlorofluorocarbons CFC-11 (CCl3F), CFC-12 (CCl2F2), and CFC-113 (CCl2FCClF2), carbon tetrachloride (CCl4), methyl chloroform (CH3CCl3), and the bromine gas Halon-1211. Starting in the 1950s only the two natural sources and CCl4 had any substantial contribution to EESC. The maximum of EESC occurred in 2000 at 3.79 ppbv. We use 1980 as the reference year before significant ozone depletion (at about 2 ppbv). The thick vertical line at the right of the graph shows the estimated value as of the date on the graph. We also show the percent decrease of EESC of the graph date from the maximum amount relative to the 1980 value. Currently this is about 20%.

There are natural and anthropogenic sources of the halogen gases. The anthropogenic compounds are known as ozone-depleting substances (ODSs) and are controlled worldwide by the Montreal Protocol [1]. These source gases are released into the troposphere and are then carried into the stratosphere by air movement. Once in the stratosphere, the source gases are converted into reactive chlorine and bromine by ultraviolet radiation from the Sun. The emissions from the surface are measured in kilotonnes per year (Kt/y) or gigagrams per year (Gg/y).

The rate of conversion is different for each compound and we measure this as the atmospheric lifetime, measured in years. The larger the lifetime, the slower the release and the longer the compound will remain in the atmosphere. Values generally range from 1 to 100 years.

The ozone depletion potential (ODP) is a measure of the potential of a compound to destroy ozone. ODP is calculated with respect to CFC-11 (CFC-11 has an ODP of 1). Larger values indicate more potential to deplete ozone.

The details of the calculation of EESC can found in Newman et al. (2007)[2]. We need to know the concentrations of the halogen source gases. These are measured and estimated using various scenarios as described in the WMO Scientific Ozone Assessments[3][4][5]. The current scenario used is the 2018 baseline A1 (see pp. 6.27–6.34 in the 2018 Ozone Assessment[5]). This scenario assumes that the Montreal Protocol[1] will be strictly adhered to and projects steady decreases in most ODSs over the coming decades. The calculation sums the number of chlorine and bromine atoms from ground-based observations of the halogen source gases, accounts for a transit time from the ground to the stratosphere, and factors in that bromine is about 60 times more efficient than chlorine in destroying ozone. It also includes the varying rates at which chlorine and bromine are released in the stratosphere from the different sources, accounting for the ODS dissociation in the stratosphere relative to the amount that entered at the tropopause. Finally, it takes about 5.2 years for these halogens to reach the Antarctic stratosphere where they can act to deplete ozone.

The 2018 baseline A1 scenario[5] is constructed from data obtained from the Advanced Global Atmospheric Gases Experiment (AGAGE) and NOAA's Halocarbons & other Atmospheric Trace Species Group (HATS). The A1 scenario is calculated from the observations from these two networks into global averages.

The following links will take you to non-NASA sites.